In past years we have offered a variety of talks and discussion groups. These public programs have been on neuroscience, depression, bipolar illness, attachment and parenting, obsessive-compulsive disorder, addiction, emotional education, the roots of prejudice, an overview of psychotherapy, and the integration of primary care and mental health care.

We also sponsored “Mental Health First Aid” a twelve hour class on how to respond to a person in crisis.

In 2014 the program began by observing May as Mental Health Month. Common Ground Coffeehouse hosted a reading called “The Poetry of Mental Illness”. Among those presenting were Lisa Starr (former state Poet Laureate), Nancy Greenaway, Jen Lighty, Eileen Miller, and Steve Hollaway. Others read including Socha Cohen, Patrick Tengwall, and Adam Dydak. This event began an ongoing series – the 2014 NAMI Block Island Summer Program – flyers posted all around the island to bring awareness and begin reducing the stigma of mental illness – as well as advertise the talks. 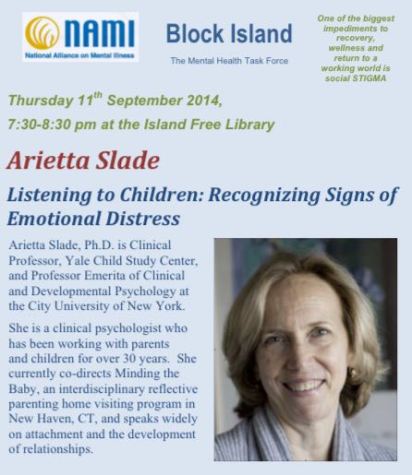 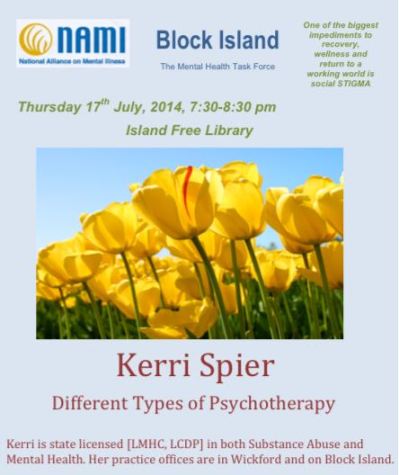 BI is very vulnerable to sea level rise as well as other global warming effects. Facing this can affect our mental health, distress is a realistic response, not a weakness. Find ways to respond and keep well here at Climate Psychology US.